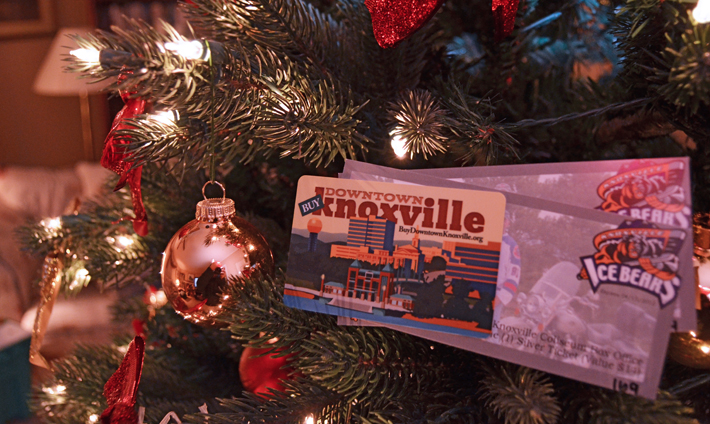 Every holiday season we struggle with what to get certain family members. The CBID is helping out by providing a gift that delivers for everyone in the family. From the Pinterest-obsessed craftsperson, to the family fooddite. The Buy Downtown Knoxville gift card supports local business, and that’s something we at Knoxify can get behind. We interviewed the folks from the CBID to find out the genesis of the project. Below the interview you can find the contest rules for the card giveaway!

Knoxify: Where did the idea come from?

CBID: A local economy gift card is not a new concept, and other cities have similar programs to help their Business Improvement Districts. The CBID Board discussed this concept in the past, but when we heard about a Tennessee-based company having very positive results in Chattanooga with this program, we decided to see if it was something our merchants would support. It turned out that the atmosphere was right for launching this program when we did, and merchants were very supportive and excited about it. With a lot of new businesses that have opened downtown recently, there is a vibrant mood, and people were very excited when they learned the details of the program.

K: Do you focus on businesses that buy/grow/create local versus import from other cities?

CBID: The program is definitely geared to help local merchants succeed and compete with national chains, which are the only gift cards you see on the racks in grocery stores and drug stores. The Buy Downtown Knoxville program, however, is not exclusive to any type of business – the only requirement is that the business is located downtown. What we’ve seen is that local merchants have jumped on the opportunity to be a part of it because they recognize the potential it has to put them on a more level playing field. Larger corporate merchants don’t always see the value to them to be a part of a program like this until years down the road the public is asking them why they are not involved. That’s what Chattanooga saw. 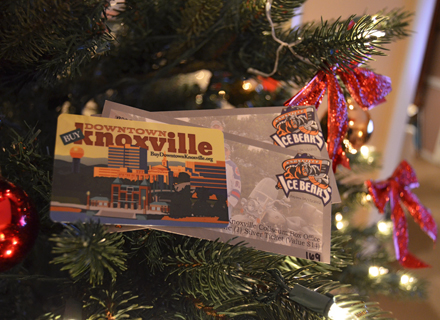 K: Are you looking for continual growth?

CBID: Yes, absolutely. Right now we are focused on making the program successful with the current pool of merchants. We will definitely look forward to adding more merchants, as well as finding corporate partners that would like to purchase bulk quantities of cards to give as employee incentives and gifts. To give an idea of how it grew in Chattanooga, their program launched with 12 merchants and now they have over 90. In Knoxville we started with 30 merchants. Our focus this year will be on marketing those merchants and trying to drive people into those businesses as much as possible.

K: What has the reaction been so far?

CBID: The response from the public has been overwhelmingly positive. We have heard wonderful things from a wide cross-section of people stating that they think it is a good idea. We did a soft launch in late September, and since then we’ve had $8,500 in card sales, which will all go directly back into downtown. We hope that the holiday marketing will get the word out to more people who are looking for a unique gift to give this year. We also hope that more big companies will hear about this and choose to put their corporate gifting into the local economy as well. It’s a great way for companies to get “credit” for being a good corporate citizen and gain extra publicity without actually spending any more money on corporate gifts than they would otherwise. Judging by how successful the program is with the employees of 21st Mortgage, which purchased 250 cards for its incentive program, we think that employees of other companies would be thrilled to receive Buy Downtown Knoxville gift cards too.

K: Where can folks pick up the card?

The CBID was generous enough to give Knoxify two $20 Buy Downtown Knoxville gift cards to give away. They also threw in a pair of Ice Bears tickets to go with each card! To enter, please comment within this article listing your name and where you’ll likely spend your gift card. We’ll post the winners Tuesday, December 20th at 8:00 A.M.!