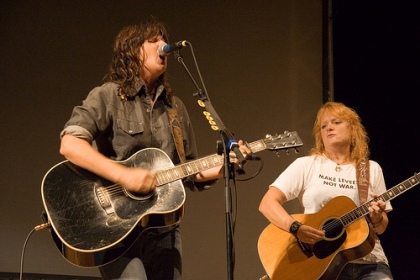 Having no real predicated love for the Indigo Girls, I wasn’t really sure what to expect of Amy Ray. What I got, in turn, was an amazing performance from a seasoned musician who has culled together a top notch band.

Ray brought a joy to the straight up rock ‘n roll show. Her entire band played in such a cohesive manner that it was absolutely striking at times. The rhythm section, including one of the best drummers I’ve seen in a long while, played with a taut ferocity. The drummer was a hybrid of Max Weinberg and our very own Don Coffey Jr., providing speed, power and tightness. In addition, the rhythm guitarist held her own next to the experienced Ray.

Which brings us back to Amy Ray. Ray won my respect. She’s an insanely talented musician who also seems to have a good heart. She spoke both on the continued healing process at the Tennessee Valley Unitarian Universalist Church, and very warmly about the ever-talented Knoxvillians Tim and Susan Bauer Lee.

Ray continued her greatness, playing guitar on Brandi Carlile’s rousing opening number “Looking Out.” Actually, the opening-opening was Carlile’s cellist/pianist performing a solo number on the cello – looping pieces, building to a sound that filled the Bijou.

Carlile is a fine enough performer on her own, but her backing band is worth mentioning. On guitar and bass are a set of twin guys, complete with the new trend of skinny jeans. Well, I’m told its a new fad… one that I’ll be passing on. No one wants to see that look on me, trust me. But the heart and soul of the band has to be her drummer. Much like Ray’s drummer, Carlile’s came to play, and play well at that.

Brandi Carlile was a bit different than my preconceived notions. I figured she fits more in the singer/songwriter category, meaning I expected her to be a bit more reserved, and low key. None of that. Carlile has an amazing stage presence. A shining example is early on when she spoke of how she “…loved the acoustics of the room.” With that, the band stepped up to the front of the stage, and played the thoroughly upbeat “How These Days Grow Long” without the assistance of any mics. She also had an easy way about her, weaving stories in along with the songs, including one about meeting and having Elton John perform on her latest album.

Continuing with the obtuse aspects of the performance, Carlile and company came back out to the front of the stage later on, playing songs acoustically [with mics this time], “…like the beginning of recording the new album. Stripped down.” She then moved onto to speaking about a song that she thinks “…should be an American standard,” right before breaking into Dylan’s “The Times They Are a-Changin’.” Though her version was a little more spirited, Carlile later commented to the crowd that she wondered if Dylan would hate her version, and that she could hear him asking “why is she yelling?!?”

For the encore, the twin brothers came out first, and did a tremendous rendition of Simon & Garfunkel’s “Sound Of Silence.” Carlile then entered the stage and played back-to-back Johnny Cash songs, “Jackson” and “Folsom Prison Blues.” I don’t say this lightly – her version of “Folsom Prison Blues” is 99.9999% on par with the original. It was flat-out astounding, with additional guitar parts added in. The only thing I can equate it to is seeing Son Volt perform Waylon Jennings’ “Are You Sure Hank Done It This Way.” It’s a a performance for the books, but the original is steeped in so much honesty you simply cannot discredit it in favor of the cover.

Carlile continued on, performing a duet with Amy Ray of a Ray original, “Johnny Rottentail.” Carlile then moved on to telling how she grew up with old country music, how much she cared for it all. Continuing with telling her tales, she sang potions of a trio of Tammy Wynette tunes which included “D-I-V-O-R-C-E,” “I Don’t Wanna Play House” and “Stand by Your Man,” The latter of which she commented how the song never really rang true to her as a child, and she didn’t know why then.

All in all it was an evening filled with exceptionally talented performers, playing songs that were real, hopeful and true to the nature of the singer. That’s all we can ask for.