According to a data dump at the New York Times they are. When sorted appropriately, Remade in America displays student population growth amongst Blacks, Hispanics, and Asians in the Knox County school system. Meanwhile, the White population fell by 7%.

So, what does all of this mean? According to the Times:

Immigration’s impact is often first seen in the classroom. The increasing diversity of the nation’s education system is the most detailed measure of where immigrants have settled in recent years. 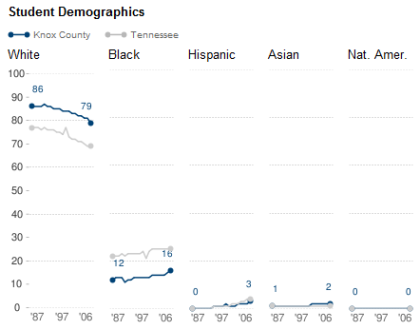 This set of data also states that in 1987 there was a 24% chance that two Knox Co. students selected at random would be members of a different ethnic group. In 2006, that number rose to 34%.

To all of the parents out there – and I’m not one of them: Do you think Knox County schools are embracing the growth in diversity as they should be?