“Call it fate, call it luck, call it karma. I believe everything happens for a reason.” -Dr. Peter Venkman, Ghostbuster

Let me preface this little article, with a short story. Last week right here on the illustrious Knoxify comments section, I wrote a quick blurb about a new market in Maryville and their beer selection. Moments later a message popped into my inbox from Knoxify’s own CP. He has been trying to help me to find a general direction, for topics to write about. Here’s a an excerpt from his email, “Hey buddy, I saw your comment and thought, I need to see if Chad wants to write about beer in Downtown, Maryville… what about a series on bars, stores, etc. and their beer selections?”. Now I refer you to the famous quote at the beginning of this article. Why yes, yes I would like to have an excuse to drink beer at a variety of establishment, and talk about what all happened the next day. Usually I would call that Monday morning, but now I can say, it’s for an article! Now I understand we don’t exactly have deadlines as far as articles go around here, but don’t think for one second I won’t eventually say to my wife, “but darling, I just have to go to that bar with my friends tonight. I have a deadline, and the loyal Knoxify readers are depending on me!” So with that I say, yes, yes CP, I would like to write about beer selection in Maryville. Now on with the show…

On Saturday night, 12/12/09, the wife and I ventured into downtown Maryville, TN. One of the great things about Knoxville is that not only is Knoxville itself such a great place, but its smack dab in the middle of other great places to be. It’s the epicenter so to speak. You can reach downtown Maryville in 20-30 minutes from downtown Knoxville. It’s a small little city but with plenty of character, and it’s slowly starting to take a note from our own downtown and revitalizing with new stores, restaurants, and apartments popping up at a regular pace. It’s also home, to the huge “Foothills Fall Festival” every October, that brings visitors from all over the country, with big names in country music and classic rock filling out the concert lineup each year.

On this particular trip, we went to Brackins Blues Club. Brackins is right in the center of downtown, on the main drag. It’s a small venue with around twenty-something tables in front of the performance stage, and a decent size bar with a string of bar stools available within eye shot, to the left of the stage. A small dance floor located directly in front of the stage was put to good use throughout the night. There’s also a small patio and a separate room behind the bar, with pool tables. 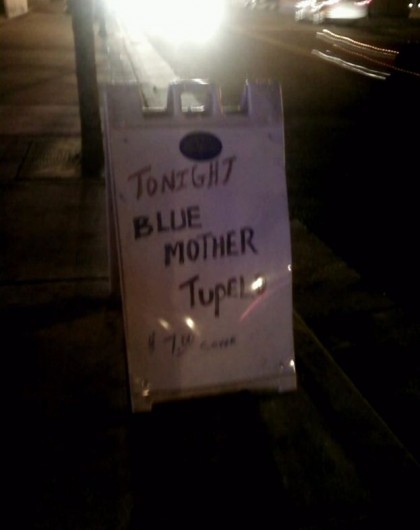 They advertise “100 different beers from around the world” and although I didn’t count, I would say that’s pretty accurate. Two coolers full of a wide variety of bottled beer, and what looked to be around thirteen varieties on tap. In bottles they have all the usual domestics Bud\Coors\Miller, but also a good variety of imports and microbrews. On tap I saw beers ranging from PBR and Guinness to Arrogant Bastard and Fat Tire. The bar staff was attentive, friendly, and as quick as possible considering it was a packed house. They serve the usual pub food, although we didn’t eat; the wings, nachos, and quesadillas that were all around looked and smelled delicious. It is a 21 and up bar so smoking is still allowed. 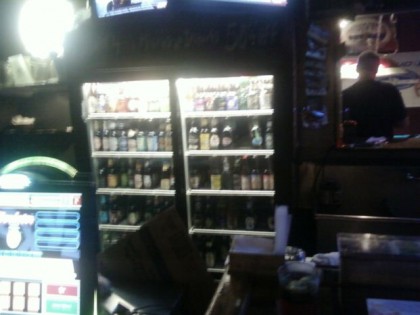 Brackins has a ton of great atmosphere, from the friendly staff, and random memorabilia stuck to the walls, to the awesome music they bring to the city. It’s obvious when you walk in there are several regulars who all know each other, but everyone makes you feel right at home as soon as you come in the door. We sat at the bar, and everyone round us was eager to chat, and we struck up conversations with several folks around us. 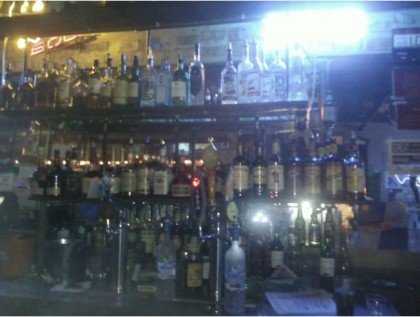 We went to hear one of my wife and I’s favorite local bands, Blue Mother Tupelo. If you’ve never heard them, you’re depriving yourself of an evening of down home, southern, swampy, bluesy, soul filled music that is guaranteed to stir you. The husband and wife combo of Rickey and Micol sound as though they could have easily crawled from the front porch of some rickety shack in the Louisiana swamp, or some back door blues house in Memphis. Between Ricky’s guitar pickin’ and smooth dobro twanging, and Micol’s sultry voice and heart filled piano playing, their music will move you, and make you wonder, where have these two been hiding!? Also, between sets, Micol was handing out homemade chocolate oatmeal cookies (a.k.a. cow patties) to the crowd. 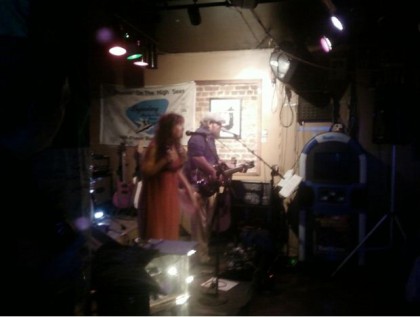 So all in all, it was a great night. Brackins is a great place if you’re looking to change it up one night from the usual Market Square\Old City venues. They always have great music on hand, and it’s just a laid back place to kick back with a good cold beer, with plenty to choose from. Beer prices are average, and the cover was a reasonable $7.00 after the music started. We will definitely go back. The only negative I could possibly think of was after a couple hours my wife’s allergies started acting up because of the smoke, but it was no worse than any other bars that still allow it.