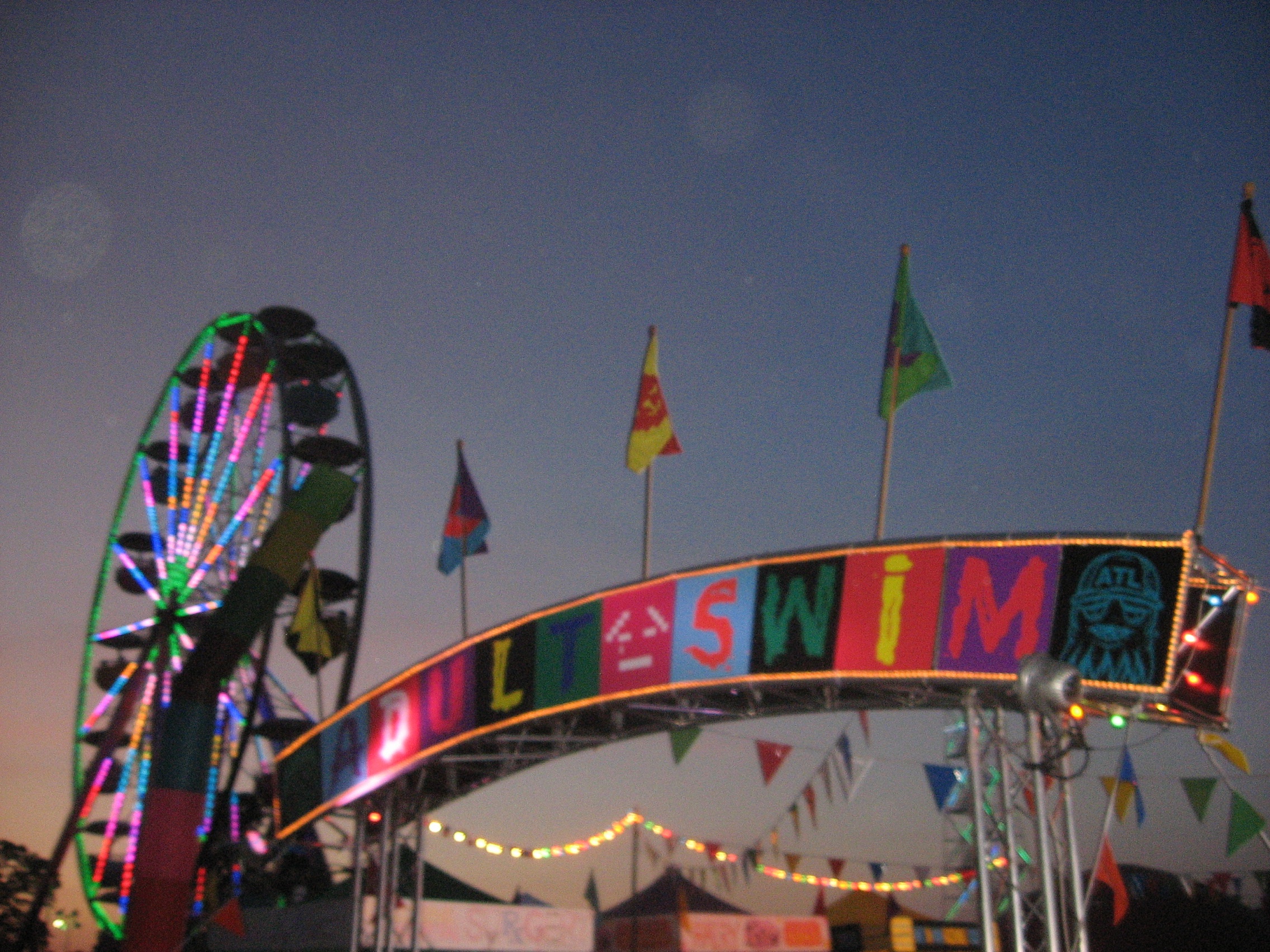 This is a guest post by Brent Thompson. Brent is the business development manager for Knox ivi and co-hosts its flagship show, Eleven O’Clock Rock.

Bonnaroo is bliss. It might not be your bliss exactly, but hear me out. For the people who choose to go, it is an event on the calendar planned months in advance, an eternal memory waiting to be made. It is a festival that is ultimately nothing short of “intelligent design” for “anything goes” if only for a few short days.

There you are, contemplating your entertainment future with so many options it hurts. It’s is a veritable playground to feed whatever appetite you have the moment you have it. 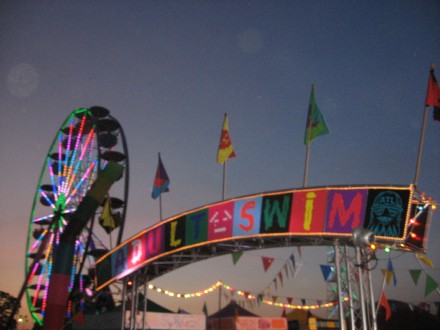 The kinds of people who choose to go are a human dichotomy of preparation.

We’ll call one side high maintenance and their equally worthy counterparts are low maintenance.

If you’re low maintenance, you don’t pack. You may have a change of mind but not much else. You are completely fine wearing not much at all and have a general disregard for hygiene. You brush your teeth with the remnants from a plastic cup you found in the garbage. Remarkably, you can sleep passed out on the dirt in the middle of a crowd for everyone to shuffle their drunken feet past your head. You accept drugs from just about anyone only to find out after they’ve vanished that it’s “laundry detergent.” Oh, and you’re a shoe-in with your impressive pattern of extreme sunburn markings — You animal you! 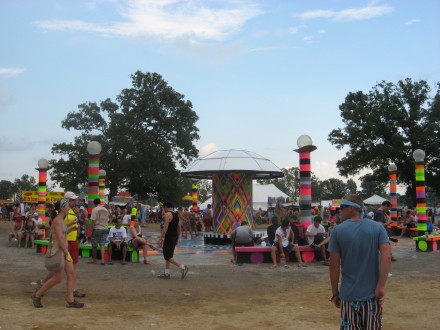 By contrast, if you’re high maintenance, you are there for the same love, but with a different approach. You have purchased all of your high-tech gear that makes the “Rooxperience” the best it can possibly be. You’re outfitted with all of the creature comforts, from claw-molded foot sandals protecting your sensitive feet from the jagged pebbles in the path to the personal battery-operated misting fan cooling your face with the essence of rose water during the afternoon heat. You have a Camelbak backpack filled with an elixir of vodka and cranberry juice keeping you in constant drink supply. You become the envy of everyone. Your drypack is filled with all the right snacks and nutrition along with a handy woven straw mat so you don’t get your bottom dirty on the ground … and the magical bathrooms that somehow just got cleaned are pristine awaiting your application. Sunscreen evenly applied, schedule pre-determined on the Bonnaroo iPhone app and if all goes according to plan, you’ll be falling fast asleep to the soothing sounds of Daryl Hall and Chromeo. 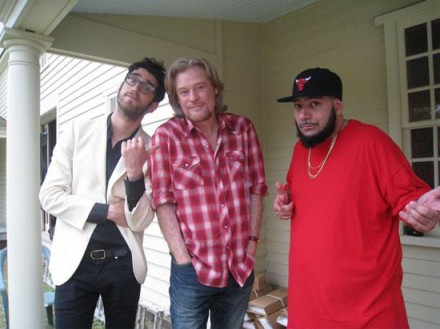 It’s not always comfortable. This ubiquitous sunshine weakens the strongest men, and the relief of shade is a commodity. Your competitive spirit is awakened trying to find the right place in the audience where you can actually see the stage all while trying to defend your view from the seven-foot mammoth with the exceptionally wide brim or the young girl who was just hoisted onto her boyfriend’s shoulders a few rows up. Hello?

It’s an experiment in sleep deprivation by choice and a personal challenge to your will as it attempts to summon your youthful stamina even though you know you’ve been beaten. You must be able to control your nausea when frequenting the port-o-toilets so as to maintain your buzz. The concentration of odor baking under the sun in that little plastic closet makes you hold your breath longer than Houdini. And, if that’s not enough, you can watch the magic of seeing your money disappearing before your very eyes, because this is the only place where one longneck costs a much as a six pack back home. 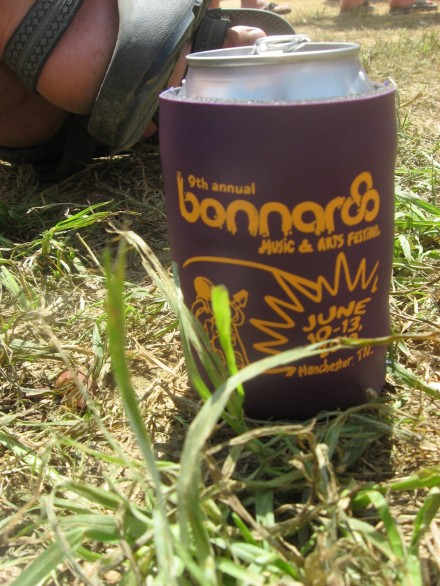 But you’ve gotten wiser through the years. You figured out how to sneak in cans of beer in a duffle bag and toss it over the perimeter wall to your thirsty accomplice posing as someone “watering the grass.” 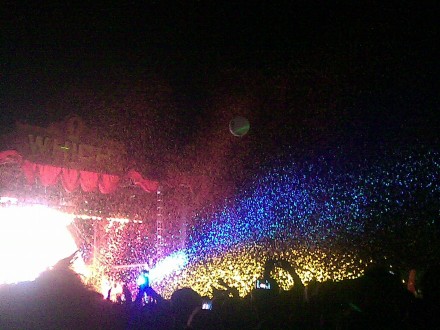 And when the cannons of confetti and decibels dance in the thick night air, you find your freedom. It’s what you came for; the guitar solo that can’t be outdone, the cries of the audience at the top of their lungs singing harmony with the band, the awareness that “this is my heaven” makes you feel more human than you could imagine.

Why do we put ourselves through so much pain? So we can say we were there. We experience joy on a whole ‘nother level. It’s an intentional sensory overload to last you ‘til next year. For just a few days we are exactly who we want to be, without jobs, without cares, without responsibility … and it feels like bliss.