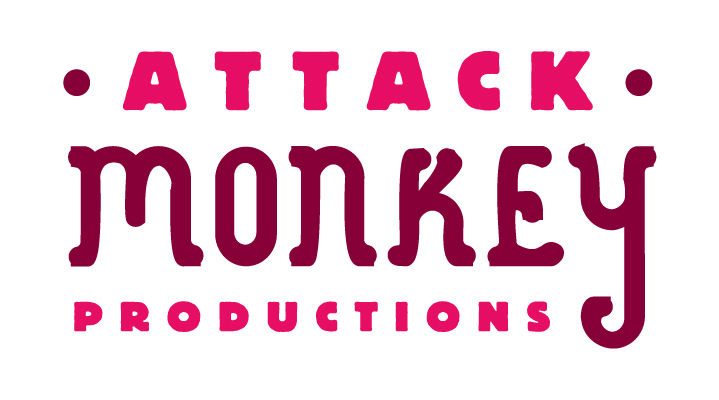 Chyna Brackeen: Before moving to Knoxville, I lived in Kathmandu Nepal at the base of a small mountain. About halfway up the mountain, there was a temple that everyone called the “Monkey Temple” because of the thousands of monkeys who lived there. The male monkeys were very aggressive. They would sit at the top of a retaining wall and call out to the females and babies to encourage them to climb up the wall. When the babies and females made it to the top, the males would either kick at them or pinch their fingertips to make them fall off the wall.

One of Knoxville's best logos.

When I came back to the U.S., I told a co-worker about this. It became sort of a joke between the two of us. We’d make references to “Kung Fu Monkey” or “Attack Monkey” whenever there was a situation that called for someone to be aggressive. I registered the domain name AttackMonkey.net as a joke in the late 90s, and used it for my personal website and email for several years.

When I left AC Entertainment, I sent out a message to my contacts giving them my email address so that they could stay in touch, but I guess I didn’t specify that it was my personal address. Somehow, a rumor started spreading that I had started “Attack Monkey Productions” and that I was doing something with the local entertainment industry. I learned about this from a local musician, who called me to see if “Attack Monkey Productions” could book him for any shows or there were other ways we might work together. At the time, of course, starting a business was absolutely not on my mind and I kind of brushed it aside. Later, though, when I started working with The Black Lillies, I felt like having a company name would seem more legitimate than just saying, “Hey, I’m Chyna and I manage this band.” I already had the domain name, and Attack Monkey Productions was a really good name, and the initials spelled AMP, which is obviously related to music and entertainment, so it just seemed to make sense.

I like it for a couple of other reasons, too. First, it reminds me of my roots and my time in Nepal – it actually means something somewhat personal, which I think is cool. But it also evokes sort of a toughness and an edgy attitude. Being female in the entertainment industry, it can sometimes be hard to be taken seriously. You have to be strong, you can’t be overly sensitive, and you have to be able to fight when it is necessary. You can be sweet and cute and friendly (like a monkey), but you also have to know when to buck up and take action. That’s what Attack Monkey means to me.

K: Do you think Knoxville is a great place to start a new business?

CB: Absolutely. This is a pretty close-knit community, and people help one another out here, for the most part. I’ve had incredible support from business owners who worked with me at other companies, and they’ve referred clients to me (and vice versa). Knoxville’s also inexpensive, which makes it easier to afford to run a business – and with so much being done via the internet these days, anyway, it doesn’t really matter where you’re located.

K: You recently landed a Today Show spot for one of your clients. What other “big stages” have you or your clients been highlighted on?

CB: That Today Show segment was really exciting. The shoot took about six hours but it was absolutely worth it. We also got a Martha Stewart segment for Ole Smoky Moonshine, and we’re in talks with the Discovery Channel about some programming with them.

The Black Lillies currently have two thirty-minute concert performances airing nationwide on PBS, and in December they were featured on NPR on the Mountain Stage radio show. Their new CD goes to radio internationally in April and there will be some pretty significant press coverage of that, as well.

I can’t give too many details at this point, but there’s an artist with whom I work who may soon have a song featured in a MAJOR national brand’s commercials. It’s not definite, but it looks really good.

K: Attack Monkey isn’t the only thing you’re working on. What other community projects do you have going on?

CB: Well, I am the former president of the Young Professionals of Knoxville, of course, but my involvement over the past year has been pretty limited since I was starting the business. I’m on the board of Knox Heritage and I am really involved with them – they probably take up the biggest chunk of my volunteer time. I’m also on the board of Tennessee Stage Company and I work on special events for the Joy of Music School. I’ve done a lot of work with the Market Square District Association on events like the International Biscuit Festival and First Night, and I’m involved with the Dogwood Arts Festival as well.

K: Since you’re in the music business I have to ask, what would I find on your iPod playlist?

CB: A lot of stuff! My taste runs the gamut from oldies to Americana to punk and hip hop and everything in between. A few things I’m really into right now, though …

Sallie Ford and the Sound Outside – they only have an EP out now, but their new album comes out in March and I have an advance copy. She sounds like an amped up Ella Fitzgerald with a rock band and bad language. I adore this band. She’ll be here in April for Rhythm n’ Blooms. Do not miss this show.

Mumford & Sons. I can actually stand behind this Grammy nomination.

Langhorne Slim – I booked him for a show at the Square Room knowing that I liked him a lot, but seeing him live made me fall in love. For real. Awesome.

Erin McKeown, thecitylights*, The Gossip, Ben Sollee. And I am biased, but I swear that you really, really should check out 100 Miles of Wreckage, which is the new album by The Black Lillies (I’m the executive producer, so again, VERY biased).