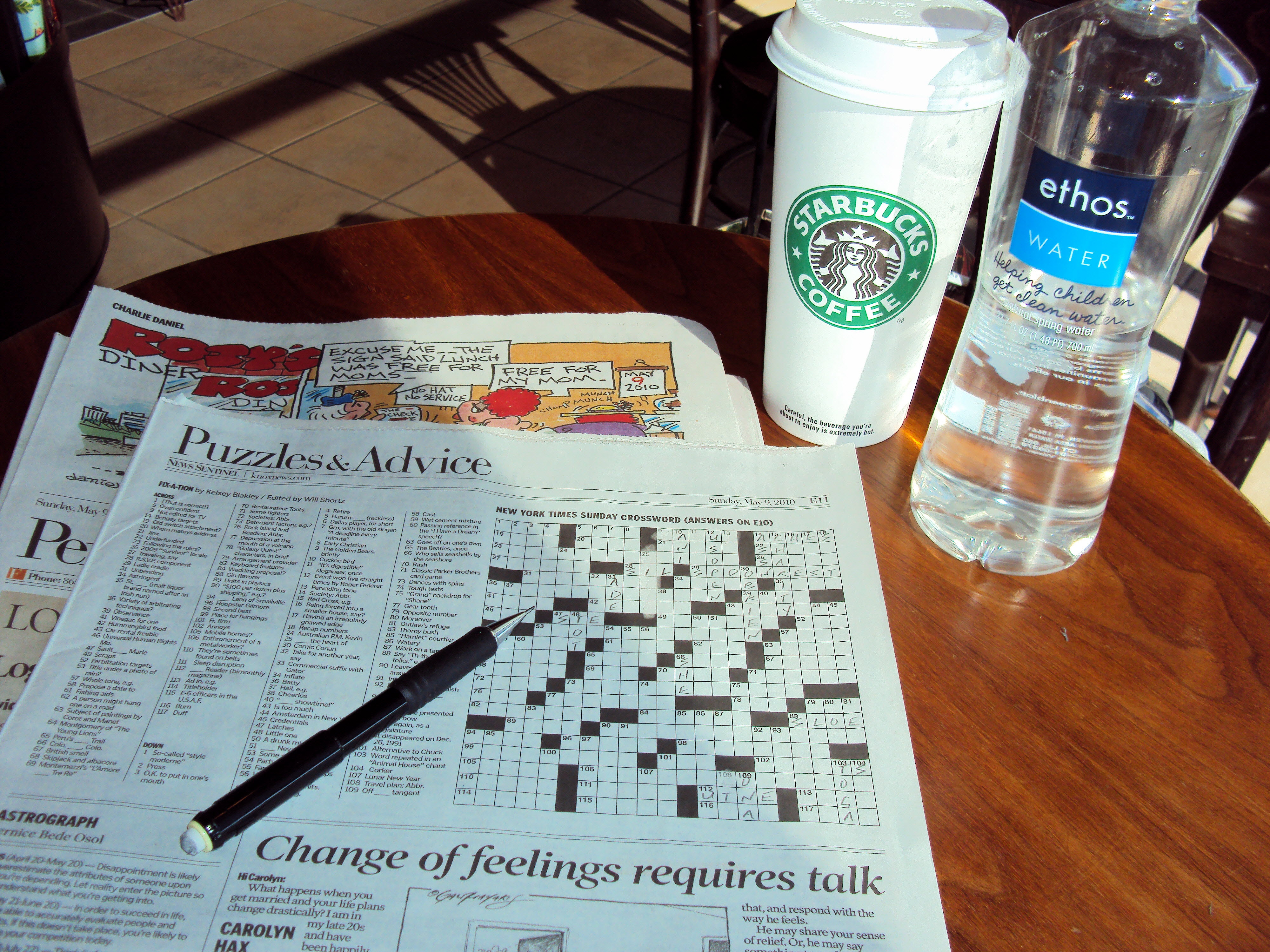 Making your way in the world today takes everything you’ve got.
Taking a break from all your worries, sure would help a lot. 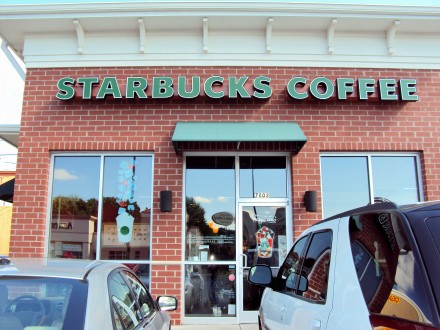 I’m not a chain restaurant kinda gal. Everywhere I love to go, everything I love to do is hyperlocal, unique, one-of-a-kind. That’s why I’m surprised at my loyalty to my neighborhood Starbucks. After all, there’s one on every corner, in malls, airports and hotel lobbies. You can’t throw a dead squirrel without hitting a Starbucks. So what makes the Montvue Starbucks so special?

Sounds corny, but it’s the people. Doesn’t matter if it looks and smells like every other Starbucks. My Starbucks has personality. It’s got heart.

Sometimes you want to go
Where everybody knows your name,
And they’re always glad you came; 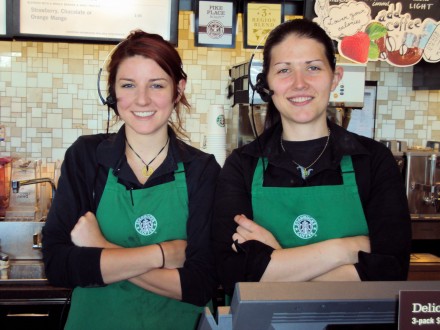 Yes, the baristas know my name, and they know my drink and that I like my chocolate chip cookie heated up and served on a plate with a fork. But there’s more going on here. When Corporate decided to discontinue my beloved signature hot chocolate, another Starbucks in town said, in effect, too bad, so sad, you’re the only person who ever ordered it. But Amanda and Molly and Josh at Montvue said, “We’ll pre-order it, stockpile it and start a movement to save your signature hot chocolate!” No kidding. So for months, Montvue was the only Starbucks in town that carried it. When they finally ran out, we shared a moment of silence. I switched to regular hot chocolate, and life went on. But I have never forgotten that they went above and beyond the call of duty for me. 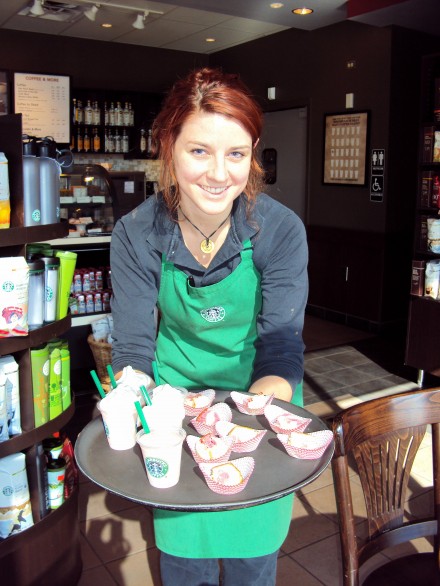 When the Starbucks phenom first began, the cynics sneered that no one would pay $3 for a cup of coffee, but people do. It’s the little things in life that count. When there are floods, earthquakes, volcanoes and layoffs looming, a piping hot cup of your custom beverage of choice makes all the difference. It’s like a sip of empathy. A taste of our shared humanity.

And when my microwave was possessed by Satan, it was Amanda at Starbucks who told me she sold appliances at Sears on Saturdays and would be glad to help me buy a new one. She gave me her mobile number and met me at Sears on five minutes’ notice. I now have a shiny new Kitchen Aid, no exorcism necessary. 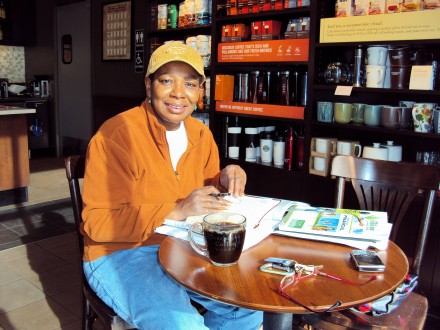 The Montvue Starbucks is my ad hoc office now that I’m self-employed. I have meetings there, do paperwork and work the New York Times crossword on Sunday mornings. It’s not just the people behind the counter who matter to me. The whole world passes through Starbucks – friends from high school, Twitter pals, colleagues from my previous workplace, old flames and sweet old people who smile at me, even though we’ve never met.

I strike up conversations with patrons at the table next to me, just as my mom used to do in the grocery store line, much to my mortification. Yes, I’m becoming my mother, but that’s another story for another time. 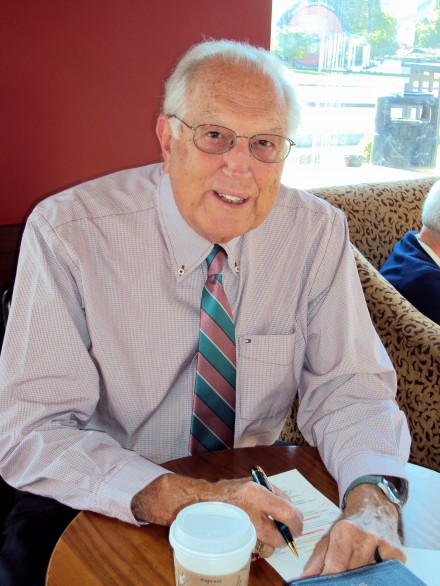 Be glad there’s one place in the world
Where everybody knows your name,
And they’re always glad you came;
You want to go where people know,
People are all the same;

Recently, Adam, a baristo at Montvue Starbucks, gave me a CD of songs he had written and recorded. I passed it along to a friend of mine who works with local talent. What a gift to be able to repay in even a small way, the kindness Adam shows me every single morning — and to know that he has the soul of an artist under his green apron.

I think the neighborhood coffee shop has replaced the neighborhood bar as the gathering place and social hub of our communities. Starbucks is the new Cheers. And with warm sunlight streaming through the windows and happy customers plinking away on their laptops, a coffee buzz is all you need to feel at home. Or in my case, a chocolate buzz.

Where everybody knows your name …