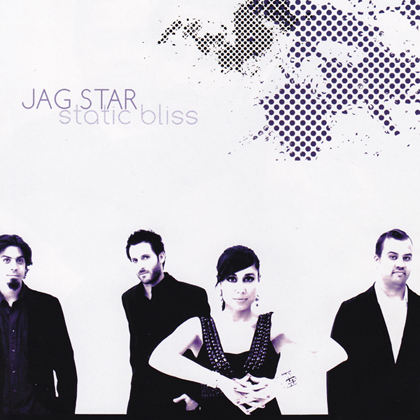 In writing this review my gut is wanting to swing towards an unhealthy diatribe about the sad state of pop music. Not as a dismissal of what Jag Star does and represents, but the fact that they haven’t broke to a number one download in the iTunes Store. Yet no talent fools like Katy Perry and Kesha [notice no dollar sign] strike it rich.

But instead of focusing on the negative, let’s move on to the positive.

With Jag Star’s latest album, Static Bliss, they continue to produce upbeat, quality, pop-rock music. That’s quality with a “q.” Jag Star has always possessed the ability to mesh four ready, willing and able musicians into a singular sound. This go ’round, though, they seem to build on previous efforts, adding even more texture to the songs. Which, in turn, makes Static Bliss have a greater sonic appeal.

Jag Star is also known for appearance of their music on too many shows to list. There’s no halting that with Static Bliss. Opener “Talk To Me,” “A Different Road” among others have a feel that would fit perfectly on many a MTV / CW program. Just please, Sarah and Co., no Jersey Shore. I don’t want to be flipping around, and catch Snooki getting punched in the face to “Rewind.”

Another shining point, which has been pretty consistent as far as Jag Star is concerned, is superior production. Local albums that sound on par with nationally recognized acts always stand out to me. Travis Wyrick knocks another one out of the the park here.

All in all, if you enjoy pop-rock music, do yourself a favor and pass on the likes of Justin Bieber and Nick Jonas, and pick up Static Bliss. Not only would you be supporting a local band, but you are also embracing musicians who produce worthy work.

Also worth mentioning that Jag Star has a record release show coming up on March 19, 2010 at The Square Room. For more information, please visit The Square Room’s website at www.thesquareroom.com.